A significant and visible presence of banks in the mobile channel is a fact. Just as since 1998 we have seen an exponential growth of online banking, we are now witnessing the expansion of the financial sector into mobile. Banks set themselves ambitious goals in relation to this channel. Let's take a look at how banks are mobie’ing their brands?

Mobile banks or banks with mobile

The first difference in the strategies of individual banks is their degree of mobility. In this case, I do not expect a radical cut-off from other channels. Such phenomenon took place in the phase of development of internet banking, where completely virtual banks were created – mBank, Inteligo. Here the actions were dictated by simple economic calculation connected with resignation from traditional outlets. Thanks to this, these banks could tempt with more attractive interest rates on their products.

So what are the temptations for banks in the mobile channel? In mobile banking, most banks focused on providing a transaction service that allows you to perform basic operations on your account such as checking the balance, making transfers, managing cards and financial products. One of the basic and natural functionalities based on smartphone GPS is also the ability to display ATMs and outlets.

Therefore, in order to build a competitive advantage, the above tools for managing finances from the level of a mobile device are supplemented by additional functions. These functions can be divided into categories. The first of them revolutionize the performance of typical banking operations. From logging in, which in some banks can be done without a PIN by simply drawing a line on the phone screen – to mobile transfers. We can make them not only to a phone number or Facebook account or through a scanned QR code or a photographed bill, but even by tapping phones (Citi Handlowy).

Another category is additional functionalities, and here too we will encounter a whole range of solutions. For example, BZ WBK decided to implement the SuperWallet solution that allows to do shopping at its partners (m.in. Piotr i Paweł, Poczta Kwiatowa) from the mobile banking level.

A popular solution are also programs offering discounts at partners' points. Due to the built-in geolocation function, the mobile channel is a great tool to implement such a program. It can be found in the offer of Peako24, City Handlowy and MBank. 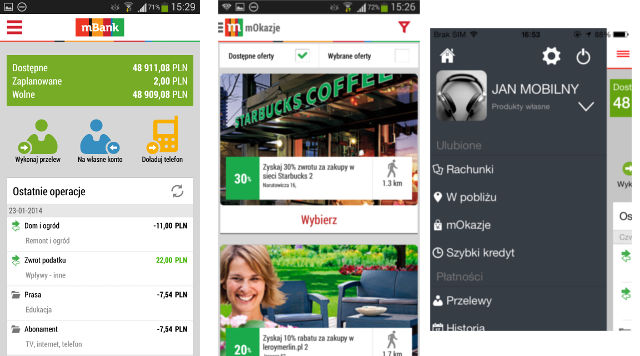 But can a bank claim to be mobile by offering such a range of opportunities?? Comparing it with the solution just implemented by Meritum Bank, I consider that the above banks simply have a mobile channel, Meritum is mobile.

Meritum Bank Mobilny is the first application in Poland to enable fully mobile banking. The ability to open an account definitely sets it apart from what other banks offer, but the form of this operation is also very friendly. You just need to take a picture of your ID and thanks to OCR technology the registration form will be automatically filled in with your data.

A distinctive feature of the application is also the ability to work offline. However, the fact that Meritum Bank distanced itself from other banks with its app was determined by its complete independence from online banking.

Entering the mobile channel turned banks' communication strategies by 360 degrees. In the previous post I focused on the analysis of the creation and what banks communicate in advertising campaigns. This time I leaned over the channels used by them to communicate strice the mobile zone.

Such integrated communication activities are extremely rare. Banks shifted most of the communication burden to mobile banking, so we are dealing with coherent and multi-channel campaigns.

TV spots, outdoor, display advertising on the Internet and mobile channel are the basic tools that were included in the strategy of most brands. However, this set is being expanded with additional, often non-standard activities. It allowed banks to enter fields of communication rarely seen in this industry such as…

Mobilny Bank Raiffeisen application made available on Facebook is a set of three mini games where players score points and compete for prizes (iPhone and iPad). The tasks set in the games referred to the key functionalities of the app. The task of the application was to publicize Raiffeisen's mobile presence, hence the use of tools such as inviting friends, sending them gifts (in the game Balance the Transfers), comparing results and bragging – publishing information on the wall. 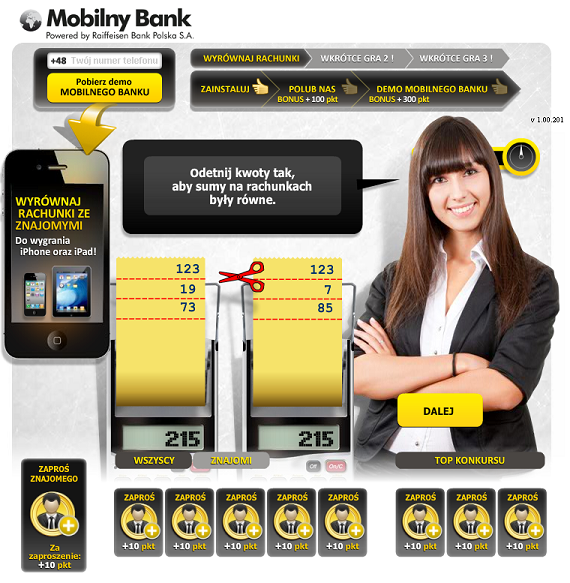 As part of non-standard activities in the urban space, two brands deserve special attention – ING with its "mobile bench" (I saw that today most of the cables are already broken, which means that it fulfilled its function)… 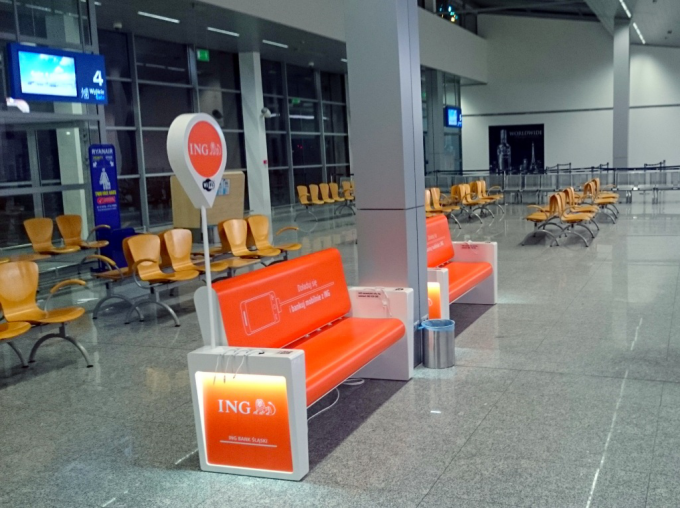 …and GetinBank, which carried out the campaign on interactive bus shelters. The innovative showcase was set up in March in Wrocław at the intersection of ul. Dworcowa and Piłsudskiego Streets. In addition to information about the product, the shelter also included a module and a screen that allowed for interactive play. People waiting for a bus can download a music track by C2C band and then dance. The best performances will be used in the video.

It is also worth noting the active cooperation with the blogosphere. Banks used the lifestyle nature of the mobility of their services and, thanks to selected opinion leaders, found a common point for communication. We have already written about how bloggers were engaged in extreme testing of Mobile ING HD application on GoMobi.en.

The blogosphere was also used by Eurobank's "Lifestyles" campaign. People who enjoy a wide audience in their respective categories were invited to participate.in.: fashion: Tamara Gonzalez Perea (Macademiangirl.com), author of "Fashion Blog of the Year 2012" by Fashion Magazine; culinary: Paulina Wnuk (Frommovietothekitchen.The application was awarded the title of "Blog of the Year 2012" in the poll conducted by the Onet portal.pl; travel: Anna and Jakub Górniccy (Podróżniccy.com), 1 place in travel blogs ranking of "Press" magazine 2012, 4 bloggers, 4 lifestyles, 1 mobile application; technology: Grzegorz Marczak (Antyweb.pl), creator of a popular blog site about new technologies.

The campaign included short films presenting bloggers in typical situations. The films are as varied as the possibilities of using eurobank mobile – from a thorough analysis and review of the application, to the presentation of functionalities useful in "everyday life".

Another channel of this campaign was Facebook – there the fans of the brand could comment on "Lifestyles. For them, a competition was prepared where the latest smartphone models could be won. The participants' task was to download the eurobank mobile application, test it and answer 2 competition questions.

Extending communication beyond the traditional framework so far seems to be the way to go. Banks have recognised the potential of integrated campaigns and have found the subject of communication where it works well. And this is a very positive outcome of banking mobilization.