Polish consumers are very sensitive to promotions. Every retail chain bombards you with permanent communication about price cuts. Mobile provides tools – for example, mobile applications with market newsletters, which make it easier to surf for deals on diapers, drinks or cosmetics.

Below is a short summary from PBI/Megapanel, which clearly shows that mobile traffic is definitely greater than desktop traffic. Below is a summary of apps and services from the plot „Promotions and sales”.

One has to suspect that the reason is mainly the desire to check out the offer at the time of purchase or during the journey to the POS (e.g. It is difficult to go through such a process (e.g. shopping on the way home from work) instead of painstakingly preparing in front of a computer screen in the evening.

Newspapers are arriving in abundance – the cost of distributing a PDF is negligible compared to a paper version. In the store tab of Biedronka in the Blix app, as of today (04 August 2017) there are 7 offers. 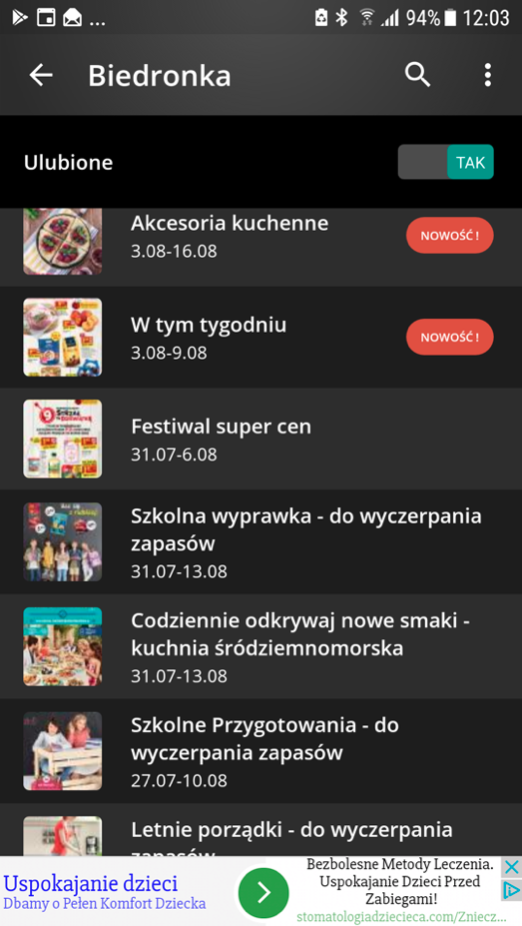 It is hard to get through such a dose of information, even if the search engine in the application helps. When you type in the phrase "pampers" it displays 14 newspapers of various markets to browse. 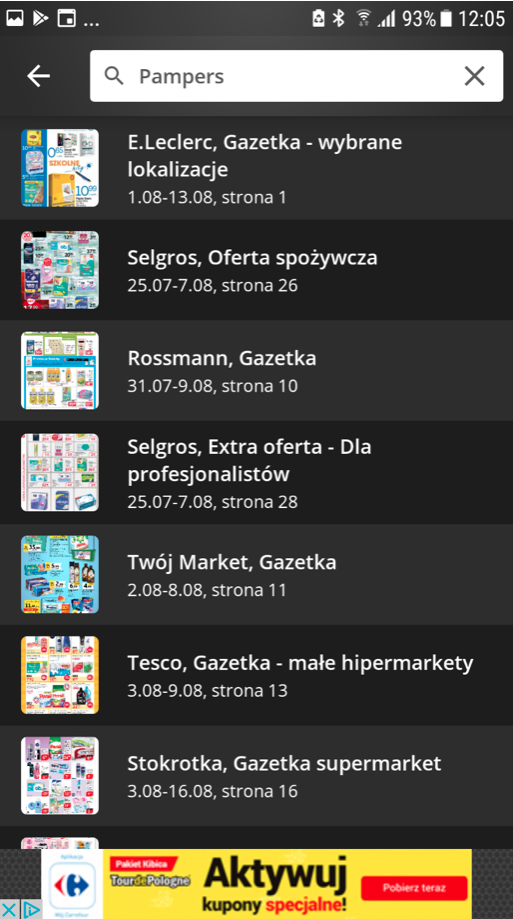 It's a great convenience, but still requires browsing through 14 pages of miniature images with product icons. Is there a way to receive information about really unique promotions?

Of course – along with the growing popularity of aggregators with promotions and coupons appeared a phenomenon which was tentatively called social-couponing. The mechanism of operation is similar to the formula of the service Wykop.en. Users upload promotions, and the community evaluates them on a "hot or not" basis. The hottest ones, which meet with great interest, are in turn promoted by push notifications to users of the application. 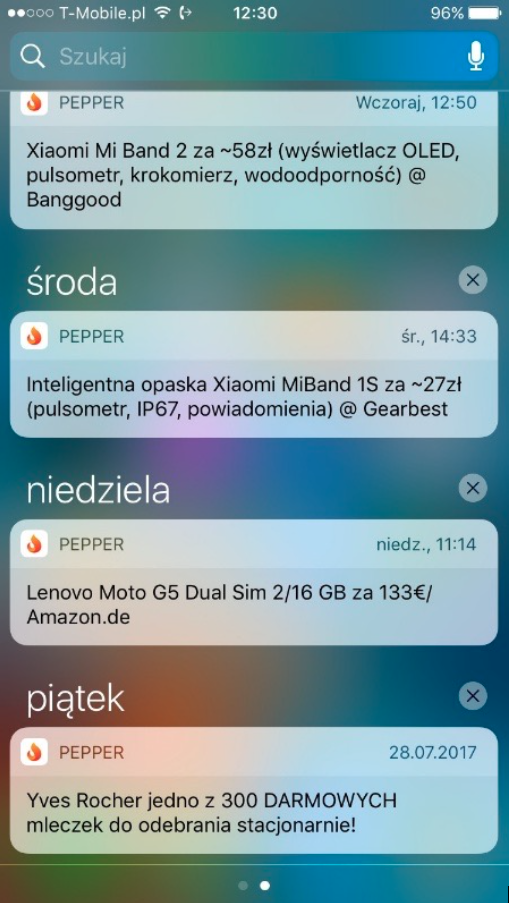 An example of an app that does a great job of communicating offers is Pepper. Pepper is an international platform. It communicates its USP in a very clear way:

Pepper is the largest shopping community in the world. No marketing spam here, just the hottest deals from people like you!

Does this actually translate into sales?

Unfortunately, there is no data from the case study, and the platform does not want to accept advertising campaigns so as not to destroy the community – this would contradict Pepper's motto. Nonetheless, the hot comments and screenshots of receipts that are uploaded as proof of transactions indicate that users are actually making purchases. 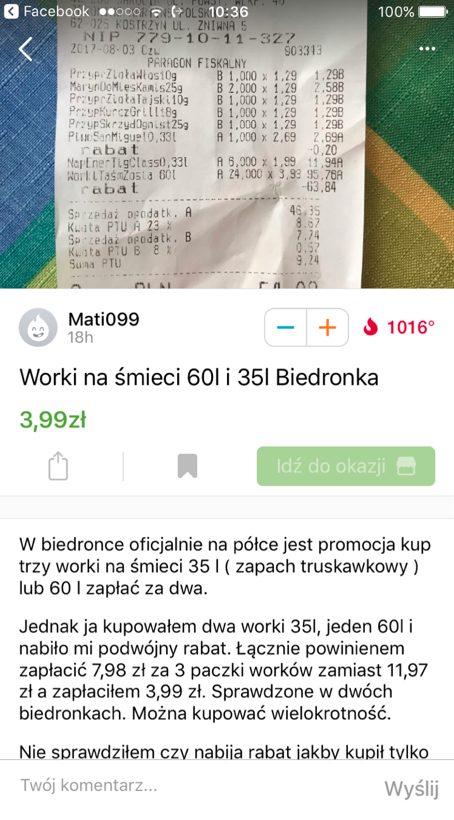 For example, within 18 hours a post about garbage bags for 3 PLN has collected nearly 1100 likes and 137 comments. Some included receipts with endorsements from other users. 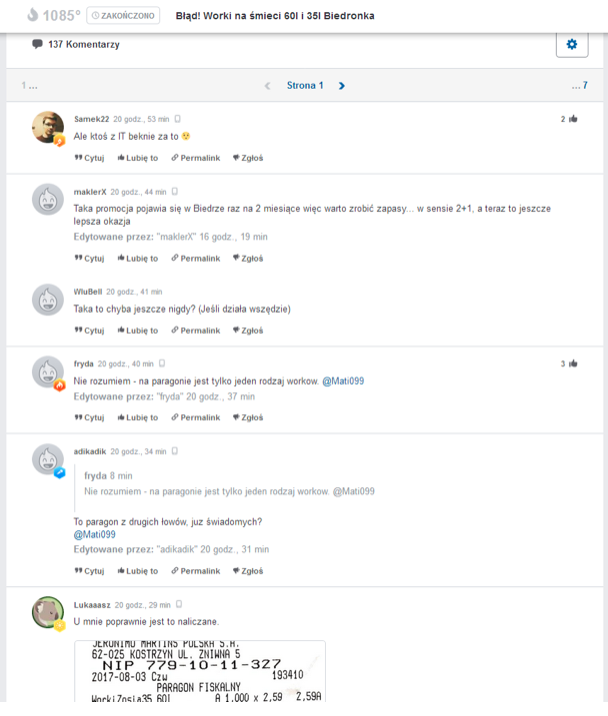 It should be assumed that applications of this type will become more and more popular, as recommendations from other consumers are one of the most valuable factors supporting purchases. It is highly probable, however, that these communities will develop parallel to Facebook or Instagram, as social savoir-vivre is unlikely to accept posting a receipt with garbage bags from Biedronka.

One may wonder about consumer behavior – where lies such a great fascination with the widely understood phenomenon of "promotion". We should assume that in the dormant archetype of the hunter, which characterizes the human race. In ancient times, man proudly displayed his deer or pheasant he had hunted, presenting antlers or feathers to his fellow tribesmen as proof. Nowadays, when we've cut down on the game, we take the opportunity to brag about the receipt from the bargain hunt as a substitute. Hence, the name of the discussed psychodemographic segment "promo hunters" seems to have a hundred percent justification here.

More on promo hunters in the article "Geolocation, targeting and promo hunters" in the publication "Mobile advertising sells").

Snapchat reaches for 3D selfie. And even further

Social media marketing – the role of video is growing